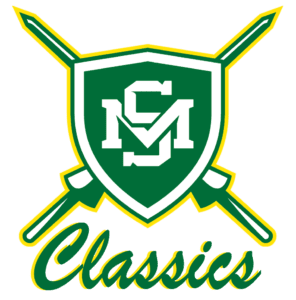 Head Coach Damin Lopez, “In the Fall there were some rumblings during the football game vs. Arcadia which we felt they crossed the line and were disrespectful. Our boys fought their tails off but we came up short in a very close battle. That loss was a little bitter considering the circumstances. That was quickly erased when volleyball beat them in playoffs a few weeks later and ended their season, so the rubber match was Boys Basketball. The Bleacher Creatures were in full force, the parent support was amazing and the faculty/staff cheering section was on point. It ended up being a fantastic night for the SM family.”

“Saint Mary’s football gained confidence going into the off season with a thrilling double overtime road victory over the Thunderbird Chiefs, 22-21. “We fought and competed hard against Thunderbird and were glad to pull out the double OT win,” stated Athletic Director Greg Fahrendorf, “although we came up short in our ultimate goal, we built great momentum into the off season with this win that we hopefully can carry forward into 2020.”

The Knights Boys Basketball team enjoyed a banner year but one of the more satisfying victories occurred at home this pas season against 4-time defending State Champion Shadow Mountain. “I have never beaten Shadow and although they may not have had some of the talent they’ve had in the past, these games were hurdles for us to overcome mentally,” said Senior Deven Dahlke, “it sure felt good to beat them.” The Knights swept the season series from Shadow including a resounding 34-point at Shadow Mountain.

First year coach Tommy Brittain faced an early test on the road at Cactus Shadows. The Falcons were ranked #9 in state and their student section celebrated Neon Night against the Knights. Led by All-American Defensive End Odua Isibor, the Knights turned in a dominant defensive effort and shut out the Falcons 14-0, knocking Cactus Shadows out of the top 10 and ruining Neon Night for their loyal supporters.

Congratulations to first year head coach, Chris Rideau, on his first Varsity Baseball Victory! Senior pitcher Jaxon Rideau got the start and pitched 6 1/3 strong innings leading the Knights to victory. “As in any season with coaching changes the toughest win to get is the first one. We were all so happy that we pulled through for coach and got that first one, it was a great team effort,” stated the younger Rideau.

Head Coach September Lopez, “We were back in the playoffs after losing our first round game to Flagstaff the year before. The girls were determined to continue their playoff push and go another week wearing gold.”